By The CareerBliss Team
Posted September 17, 2013

Welcome to Resume Tip Tuesday! Come to CareerBliss every Tuesday for a brand new resume tip to help you in your job search! Check out the archive for more tips.

Last week, recruiter and career consultant Rich Jones tweeted that he was literally crying from laughter after reading one candidate's bullet point, which said:

Jones Tweeted his frustration with candidates who fail to highlight notable achievements and said: "Oh really? One of your responsibilities worth noting to employers was to be on time to work? #KillingMe"
Since hiring managers and recruiters like Jones sift through hundreds of resumes, they're bound to come across a few gems like these from time to time.

And by gems, we mean face-palm-worthy bullet points!

So, we went on a quest to scope out the worst real life bullet points that managers have seen on a resume. These are all either meaningless (like the one mentioned above), misspelled or just plain weird! CareerBliss community, we know your resume wouldn't include anything resembling the following terrible bullet points. Know you're much better off than folks who included these 10 other bad bullet points!:

This resume was sent for a job at Bloomingdale's in New York.

-- Rod Hughes, vice president of Kimball Communications
"Love the word, but would rather see that in a cover letter."
-- Sherry Thomas, president of Palm Beach Etiquette
These three words were listed under "Skills"
-- Mike Ketcham, general manager at Weather Radios Direct.
The phrase is just a bowl of snooze!
-- Faruq Hunter, President of GeniusCorps

This was listed under "References."

--Scott DiGiammarino, CEO and founder of Reed Potential
Apparently, this appeared multiple times in a resume for a sales position.
-- Gabriel Ferland, president and CEO Last Rose Studios
-- Meg Favreau, senior editor at WiseBread.com.
For all you visual folks, here's a compilation of the 11 worst resume bullet points in this faux resume we made just for you!: 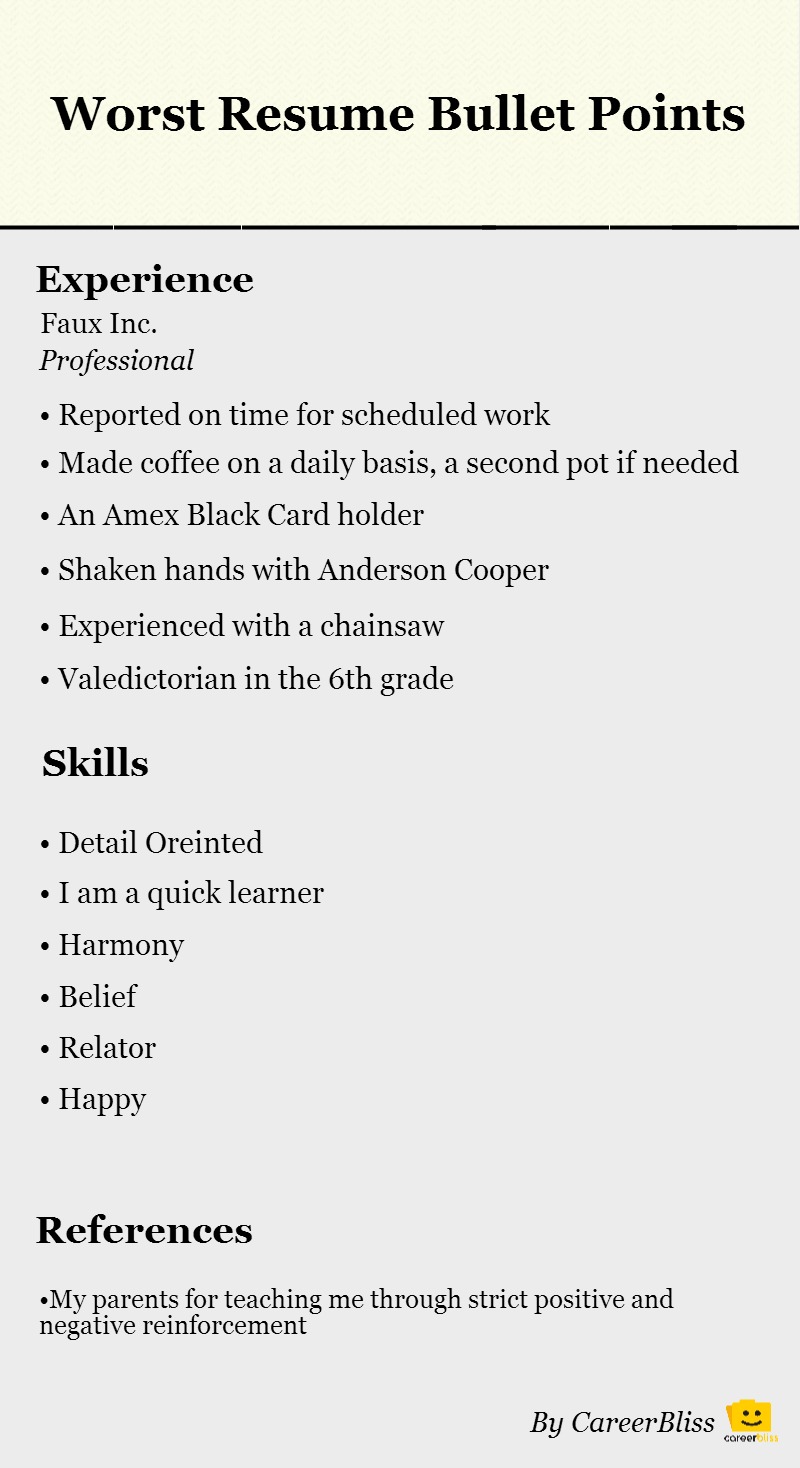