By The CareerBliss Team
Posted September 08, 2011 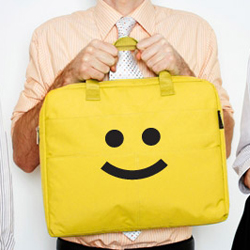 Having sat on both sides of the interviewing table, Guy Cole is conscious of the importance of non-verbal communication flowing between the two parties—or among all parties involved in the process. As a network manager, he has conducted many interviews over the years, so many in fact that he can honestly say he loves interviews! Even as he is seeking a new networking opportunity for himself, Cole relishes his face time with hiring managers, calling it both “tricky” and “fun.”

“I am very aware of my body language during an interview as I have interviewed so many people in the past,” says Cole of Rochester, Mich. “It’s made me aware of things like how you shake hands properly, looking people in the eye, and leaning forward while speaking.

So, how can you improve on your chances of acing an interview and getting closer to the job? Body language expert and jury consultant Susan Constantine has a few tips to share.

“Always make good eye contact, have a genuine, warm smile but not a phony smile,” says Constantine. “Use a professional gaze—80 percent on and 20 percent off—glancing off to the side 20 percent of the time.

“Feel joy to meet that person, put yourself in a place of fun, saying, ‘I’m having fun and my body language will follow. I’m going to nail this job.’ Don’t roll your eyes around the room, be very present with (the interviewer); the ‘be there now’ rule.”

Have a “confident hand shake,” says Constantine and don’t grip a hiring manager’s hand as if you’re testing your hand strength. Conversely, don’t be a limp fish, or pump it too excessively.

Keep your body language open and honest, Constantine says, and don’t use anything in your hand: Don’t clutch onto a suitcase, purse, or briefcase, or hold onto anything that might create a barrier between you and the interviewer. “Hands literally fill in the blank for you and it’s important to use your hands as punctuation, but never use choppy hand gestures. Keep your hands controlled and away from your face. Placing your hands between your hips and your shoulders will make you look more confident!”

“Don’t cross your arms, or ‘candlestick’ your body; these things show a sign of weakness,” says Constantine. “Your arms should be totally to your side and your hands should be more mobile.

Constantine warns women to avoid playing with their hair during an interview (“Pull your hair back off the face!”), while cautioning men to shun the nervous habit of adjusting their ties while talking. “We’re usually very nervous during an interview, but hands near the face is unacceptable

The interviewee should “mirror” the body language of the interviewer as a way of building rapport. “Once the interviewer moves his or her hands on the desk, you may want to close your hand over the other on the desk, not mimicking exactly, but doing something similar,” says Constantine. “You should tilt your head in a listening position, which shows you’re interested. Also, lean from the waist, not from the shoulders.”

Align your body with the interviewer using the “Belly Button Rule,” as this also generates a better rapport when speaking. Deception or lying may occur when your belly button is turned away during the course of a conversation, or it may indicate to the interviewer that rapport has been broken.

Don’t continue to nod your head during the course of an interview, Constantine warns, though doing it once or twice in agreement is perfectly alright. “Nodding your head sends a message that whatever you say I’m in agreement with.” While executives and hiring managers “love to read other people,” they, too “really have bad body language themselves.” “Some executives don’t think they need to show positive body language because they’ve ‘made it.’ So, if you want to get the best out of your interview, don’t mimic their negative body language; just mimic the positive and you’ll appear more approachable.”

Ninety percent of what we say is actually nonverbal, says Constantine, so if your body language does not follow what’s coming out of your mouth you’re sending mixed messages. “Most people are not cognizant of their own body language, of the non-verbal signals we send to others. Non-verbal signals are sent all the time and can make or break (an interview). Between a sender and a receiver, there are 2,000 messages each sent in an hour, or 4,000 total nonverbal messages.”

Take the initiative to ease any possible tension if you are confident enough to so do. Example: At a recent interview with a large corporation in Detroit, Cole made sure he arrived 15 minutes early, and availed himself of the amenities in the interviewing room while waiting for the hiring manager to arrive. Filling a pitcher with water, he brought it over to the table and placed it in front of him.

“I didn’t want to get up and down during the interview, so I brought the pitcher of water to the table,” says Cole. “I was very relaxed, and when (the hiring manager) came in, he saw that I had water and he got himself a Diet Coke. I think me having that familiarity (with the interviewing process), it was okay for me to do this and the whole environment became more informal at that point.”

Informal perhaps, but the experienced Cole was alert to the hiring manager’s style, studying it to determine when he wanted Cole to listen and when he expected Cole to respond. “I’d interject when it was appropriate, but not as a conversation. It took me a while to take that cue to talk, but once I did, he loosened up.”

Don’t wait to implement these recommendations till the last minute when nerves and adrenaline take hold of your senses. Practice them often!