By The CareerBliss Team
Posted December 16, 2011 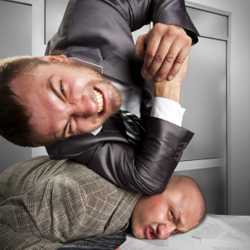 A competitive spirit has its place in the office. It can be a positive force that pushes you to do your best work, thereby strengthening your company and increasing your job security and potential rewards.

Some people, however, become possessed with the competitive spirit. They begin to view work as a zero-sum game and coworkers as obstacles to their advancement. At this point, when a coworker is willing to step on your head to reach his goals, competition becomes negative.

There isn’t much you can do to change the behavior of hyper-competitive coworkers. But, you can take steps to neutralize them and protect yourself.

Don’t let an overly competitive coworker draw your attention away from your job. Focus on doing solid work and continuously improving – not on besting a particular colleague. Simply put: Don’t compete – except against yourself. Use your past performance to set future goals and work towards those results. You’re more likely to succeed if you focus on the positive goal of continual self-improvement, rather than the negative goal of outdoing someone else.

Work to build and maintain strong, professional relationships with other colleagues. Again, don’t focus on the overly competitive coworker. Instead, put energy into gaining respect in the workplace and becoming a well-regarded and valuable member of the team overall: Deliver on commitments; praise others; accept constructive criticism; collaborate well; and be a positive presence. Work toward virtuous goals and leave the negativity of the hyper-competitive coworker behind.

Try to get an overly competitive coworker to start viewing you more as a collaborator than a rival. When the coworker in question does something well, casually recognize it during a meeting with a quick compliment. Ask for his advice on a project you’re working on – and if he provides a useful suggestion give him credit when appropriate. If you try these methods, however, and he isn’t receptive, just leave it alone. Maybe he’s just too far gone into his competitiveness.

Sometimes taking steps, such as those mentioned above, to neutralize an overly competitive coworker just aren’t enough. Blatant attacks against you or your work – and attempts to steal ideas and credit from you –  must be answered. Before you go to the boss, however, be sure that the violation is serious enough to warrant such action. You don’t want to be a tattletale. And when you do talk to your boss, keep it professional, be specific and be able to support your position. Don’t get personal; don’t whine; and don’t gripe.

Take a look around your workplace. How many of your colleagues would you describe as overly competitive? If the number is high, there may be bigger forces at work. An abundance of hyper-competitive coworkers could be an indication that there is a workplace culture -- either encouraged or ignored by those in charge -- that creates and fosters that behavior. If that’s the case, and you are unhappy with the situation, it may be time to think about looking for a new job with a company that has a culture more appealing to you.