By The CareerBliss Team
Posted September 28, 2012

CareerBliss has salary info, hundreds of thousands of company reviews and millions of jobs! 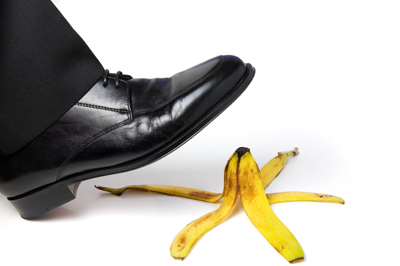 For the most part, your resume is the very first impression you give to employers – you don’t want to give them the impression that you’re careless, lazy or obsessed.

A single resume faux pas can instantly turn off a hiring manager or recruiter, and, in some cases, creep them out a little bit.

We asked a bunch of employers what was the absolute worst resume mistake they’ve come across. These are our six favorite. Laugh … and learn:

Elle Kaplan is the CEO of Lexion Capital Management, one of the only 100 percent women-owned and operated investment firms in the nation. So, it goes without saying that Kaplan is, in fact, a female.

And yet on more than one occasion, applicants have “been assuming that I am a male! Huge mistake,” she says.

Susan Hawkins, a SEO content writer from AMSVans.com once saw a resume in which the applicant had used an ampersand (&) in place of the word “and” in every instance. Job seekers, this is a terrible, terrible way to show them you’re tech savvy!

“Twitter and texting has led to the ubiquitous idea that the ampersand can be substituted for the word ‘and’ in all forms of writing,” she says, “It's really sad.”

Josh Hiebel from Saratoga Wine Exchange just got a resume this week from someone who didn't finish filling out the template.

“At the bottom it said, your name here and your address here,” Hiebel says.

Meanwhile, elsewhere in the country, Elaine Simon from DeBebians.com encountered a similar, careless job applicant who used a template and forgot to replace all the information with their own details.

“Seeing the telltale ‘ABC School- Sometown, NY’ on a resume definitely sends that candidate directly into the trash,” Simon says.

It’s hard to believe that you’ll get stuff done if you can’t even finish a resume, people.

We all know what happened when Yahoo’s former CEO Scott Thompson fibbed about his computer science degree (he got canned).  Job seekers, bending the truth is just not worth it.

“When I told one applicant that no one at his former company had heard of the ‘Executive Merit Award,’ he'd cited, he simply replied that was probably because after he'd won it three years in a row the company retired the reward in his honor.” Barry Maher, speaker, trainer, consultant at Barry Maher & Associates.

Greg Szymanski, HR director for a Seattle real estate development firm, is fed up with all the lies. He especially encounters “education credentials from degree mills or other shady institutions or misrepresenting degrees earned.”

Researching online before a major event in our lives is pretty much second-nature to us now. Before you apply for a job researching the company is a given — but spouting off too much information is a sign of desperation and, frankly, creepiness!

One candidate sent Steve Jones, VP of programming for Newcap Radio, a resume and cover letter that could have easily been used in a horror movie.

“He knew my wife's maiden name and the names of my kids. He referenced not only things that I had accomplished in my career, but family events that he should have no knowledge of,” Jones says.

“Using social media, he had gone deep and done his research,” he says.

When you upload your resume, all it takes is one click of a button – make sure it’s the right file!  Because once it’s out there, there’s no turning back.

Rachel Dotson from ZipRecruiter opened up a job applicant’s email only to find a screenshot of a desktop background.

“While it's an honest mistake, the fact that he didn't check to make sure the document uploaded correctly reflects poorly,” Dotson says.

But it could have been a lot worse. In fact, a similar hilarious resume blunder went viral recently. Vanessa Hojda, a York psychology student in Canada, uploaded a picture of crazy-eyed Nicolas Cage instead of her resume. Moral of the story: don’t save your favorite celebrity photos in a folder among resumes and cover letters … oh, and always double check your upload before you send! 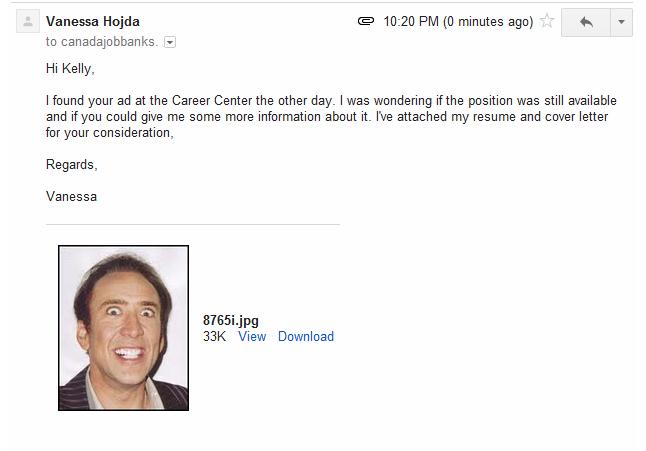 Guest posts make us happy! Want to contribute to CareerBliss? Check out our submission guidelines.