8 Signs That You Aced Your Job Interview

By The CareerBliss Team
Posted February 27, 2012 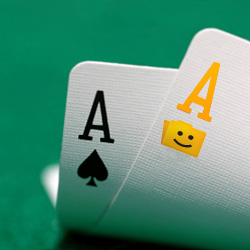 Whew. It’s over! You’re out of the woods. You’ve done your best and now it’s all up to the employers -- or the universe, stars, lucks, fate, God, whatever it is you believe in. Aside from proper follow-up, there’s really not much you can do at this point.

Vickie Austin, founder of CHOICES Worldwide, advises her clients never to judge how an interview goes because “we jump to conclusions when we really have no way of knowing how it went until we’re asked back or offered the job.”

But if you’re anything like me, you just can’t help but replay the whole production in your head. Maybe indulge in a few face-palms after wondering if you stuttered too much or littered your responses with “like,” “um” and other annoying filler words.

It’s natural to analyze — but there’s a more constructive way to gauge the success of your interview. Rather than playing the “what if” game in your head, consider what experts say are some positive clues that an interviewer is really into you.

Austin along with Judi Perkins, the How-To Career Coach and President and Founder of Find the Perfect Job shared with us some insightful signs that likely mean you didn’t screw up your interview and are, in fact, on the right path!

Of course, this isn’t a list of hard-and-fast rules — just general indicators:

1. They Discuss Your References

This is a huge one. If your employer is asking about people who can vouch for your work, it’s two thumbs up! In fact, Austin goes as far as to say that: “The most positive indicator that a job offer is pending is a request for references.”

Here’s a very subtle sign – if your interviewer seems to be beating around the bush a little bit, it could mean he’s invested in you.

Consider Perkins’ example: “The unconscious phrasing of the question “Can you travel?” is pretty neutral.

“On the other hand, ‘Would you be willing to travel’ is less blunt, and a more invested way of asking the same question,” Perkins says. “It has to do with the degree to which the asker wants a positive answer.”

Still, an even better (a super invested) variation would be: “If we were to ask you to travel one week of every month, could you do that?”

The more suppositional, the more they want you to say yes!

3. Talking about the Ex-Employee

Perkins notes that mention of their old hire could be a strong indication that you’re a potential shoe-filler – especially if that info reveals “that person’s disappointing performance.”  (Don’t do this on a first-date though!)

If you walked away feeling like you simply chatted for about an hour—chances are they like you. Of course, a formal conversation doesn’t automatically mean they’re not into you. Their interview style heavily depends on the company culture, and some employers just prefer a more Jerry McGuire-professional style.

Either way, if “a conversation is taking place rather than a Q&A session, and there’s laughter or a sense of camaraderie” – it’s a good sign, says Perkins.

Something important to note is the difference between an office tour and an unexpected introduction.

The tour is actually routine because it’s “it gives [candidates] a chance to see if this is someplace they want to work and somewhere where they'd be comfortable,” Austin explains. Unexpected introductions, however, feel a little more impromptu.

Perkins, points out if “you’re being led back to the reception area and are introduced to one or two people in passing for a 30-second chat in the middle of the hall” you might be a glowing frontrunner.

Austin introduced us to an attention-grabbing non-verbal communication tactic called “mirroring,” which is a great way to notice how connected someone is in a conversation. Simply put, if the interviewer mimics your subtle body language, then they’re fully present.

Here’s the best part: this is a tactic that you, as a job seeker, can leverage too!

For instance, “If the person doing the interviewing leans forward, lean forward. If they lean back, do the same,” Austin say. It’ll exude your excitement and interest in the position.

Warning: the key word here is subtlety. “This has to be subtle or it looks like you're mocking them, but it can be very effective in communicating in a non-verbal way "I'm with you."

7. Interview Goes into Over Time

Both Austin and Perkins agree that going over the scheduled time could be construed as a stamp of approval.  However, Austin gives a fair warning that — out of courtesy — you should point out that “we’ve gone past the allotted hour and I respect your time.”

“Then, it’s up to the interviewer to say, “Oh, I’ve got another half-hour if you’re available,” Perkins says, “And of course, the candidate would eagerly say yes!”

8. Clear About Hearing Back

Simple: if they’re into you, they’ll at the very least tell you exactly when they’ve made a decision or require a second interview.